Street Legal dirt Bike is a dirt bike with manufacturer’s permission to drive on highways in the state of California, United States. Only dirt bike that adheres to the state’s emission rules and also has speedometer, mirrors, odometer, horn, blinkers, lights, windshield in addition to bells and whistles as well as CARB permit or EPA sticker from the manufacturer showing that it’s legal for highway use in California. Only then can such a dirt bike ride on highways. 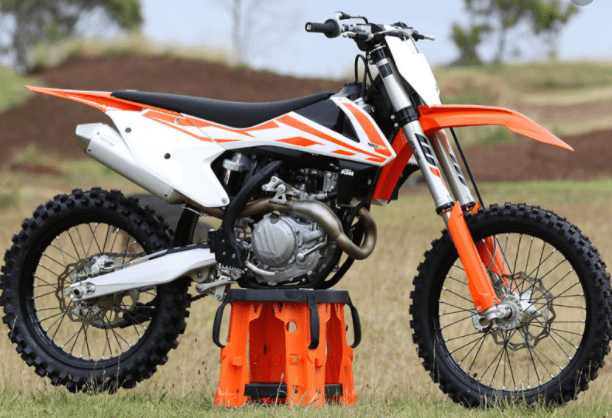 That said, is your dirt bike street legal?  Back in 2004 dirt bikes legislation restricting off-highway vehicles from riding on the public road/highways in California came into law. So, to make your older dirt bike street legal, it either needs authorization by the manufacturer or you convert it into a street-legal motorcycle vehicle model. On the other hand, only a dirt bike that meets the state’s emissions requirements can convert into a street-legal model.

Perhaps, if you want to know what this post holds for you in a snippet. Namely, here is the content Breakdown;

To start with, not all dirt bikes are street legal in California, except for dirt bikes manufactured for use on public roads. At the same time, dirt bikes that don’t meet the state government emission guidelines are in a group of Off-Highway vehicles.

For example, Off-highway vehicles are two-wheeled motorcycles not originally equipped or certified for use on public roads by the manufacturer. Therefore, travels on two wheels, has a seat designed straddled by the operator, and has a handlebar-type steering control.

To be precise, authorized On-road dirt bike is dirt bike certified and compliant to the state emission regulation by California’s Air Resource Board (CARB).

That is to say, California’s Air Resource Board is the security body responsible for issuing red or green stickers to all approved off-highway vehicles. That includes dirt bikes manufactured before 2003.

Therefore, dirt bikes manufactured back in 2003. Thus, have the manufacturer’s warning that says “Not for use on Highways” which makes them non-street legal dirt bikes.

However, if your dirt bike has the green emission sticker from CARB, you can ride on a private lane or tracks. Better put – Off-Highway tracks. While poor emission dirt bikes with red CARB emission stickers are for the seasonal operation.

How Do I Know Dirt Bike is Street Legal?

On the other hand, If the manufacturer’s label states that the motorcycle is for both “On-road and Off-road use” then you are good to go. However, in addition to that, it needs to be certified CARB with the green emission sticker label on it as well.

Moreover, you can also check with a motorcycle dealer, the manufacturer, or your owner’s manual for help in determining if they manufactured the motorcycle for use on the highway.

No, you can buy green-stickered dirt bikes in California, but it doesn’t make a dirt bike street legal. Though, you need the emission sticker to ride on OHV tracks. Beyond that. First, you will need a manufacturer-approved public road dirt bike.

Second, alongside the equipment that guarantees safety ride found on other conventional vehicles like speedometer, mirrors, odometer, horn, blinkers, lights, windshield, etc. Only then is a dirt bike street legal to ride in California.

What if I moved from another state to California, am I subject to the same laws that govern dirt bike in California? Truth is, while you might not require showing the green or red sticker emission from CARB to use your eligible off-road dirt bike on the state’s OHV tracks. Your dirt bike may appear illegal if not registered with the California plate.

How to make a dirt bike street legal in California 2020 – Can I convert my off-road motorcycle into a Street legal motorcycle?

The truth is, you can convert off-highway dirt bike into Street legal model.  But, you need to know that any bike that doesn’t have a CARB or EPA sticker designating legal highway use in California is not getting a plate. As a result, it can’t be street legal dirt bikes in California.

In brief, to make a dirt bike street legal in the United States, California, the simple way out is to buy a dirt bike model with certification from both manufacturers and CARB to ride on a public road. That way, you avoid the huge cost and stress that comes with building or converting an older dirt bike meant for Off-highway tracks into an On-road motorcycle for public roads.

Nevertheless, if you are bent on building or converting an older dirt bike into an on-road vehicle with a modified or improved emissions system. After this, it will have to go under inspection as a specially constructed or kit vehicle (SPCNS) to determine that it comply with California’s emissions standard.

After customizing the dirt bike, there are still two things left undone. First, every on and off-road dirt bike is meant to have two fees and to have undergone two kinds of registration.

First, if you have dirt bikes with red stickers, it’s non-converted for highway use. It’s mostly for seasonal operation.

To convert a dirt bike into a street-legal vehicle, you will need specially constructed or kit vehicle (SPCNS) tools and equipment. Below is the comprehensive list of dirt bike Kit required to build a legal dirt bike usable on highways in California;

Do I Need an Insurance Coverage for my dirt bike?

In California, to use a street legal dirt bike on a public highway, make sure it’s under insurance coverage. Therefore, you need to ensure your dirt bike to protect you – the motorcyclist or driver/bike rider from bodily injury and property damage in case an accident occurs.

ALSO READ:  Car Make and Model: What Does it Mean and the Difference?

The below insurance coverage is the equipment for every street legal dirt bike, which is the same measure expected from car drivers and other vehicles or automobile riders. So, if you own a dirt bike, you sure need;

Do you need a license to ride a dirt bike in California?

It’s a law that every motorcyclist needs to have a Class M license before allowed to ride a street legal dirt bike in California. Be it as it may, applying for one isn’t that a big task. All that is needed is to pass a few tests like driving test, vision, and reading test. That’s all.

What is the best Street legal dirt bike?

We would try giving you a snippet view of the best and cheapest dirt bikes model from trusted manufacturers such as Honda, Yamaha, Kawasaki, Suzuki, and KMT.

Conclusively, if you read to this point, I trust the post was helpful. However, if proved otherwise. As a result, if there is a fact or info you would want me to correct or add to the post. Maybe, a question. Best of all, a thank you comment. It’s no big deal, use the comment box below. I delight to hearing from you.

One more thing, if you know a friend this post “Street Legal Dirt Bike” will be of help. Be it, on Facebook, Twitter, WhatsApp, Pinterest, etc. Don’t forget to use the share button below. Remember, when you help a friend, a whole community benefits. Thanks a lot for reading.